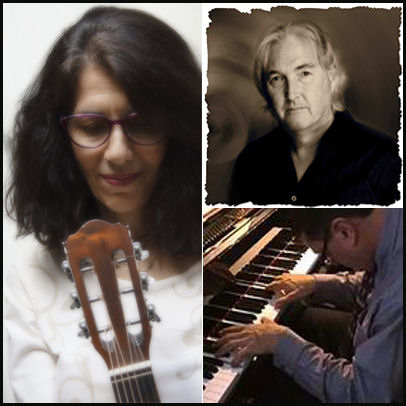 These song productions were never formally released. The two Mason-Buchanan Trio tracks were not released because the EP was not completed due to Derek’s illness; sadly, health and life situations of the instrumental musicians prevented the required ongoing work to happen. The plan for the first two songs, (blues-jazz covers recorded in late 2013) was to release them as further-produced versions on an album of jazz standards and originals. The musicians are Derek Mason on guitars, Brian Buchanan on piano and keyboard-bass, and Anthea Mason on vocals. However, in early 2014 Brian Buchanan moved back to Calgary to continue his jazz piano career and Derek & Anthea Mason moved their home and studio. Then, no album could subsequently materialize, due to the tragic passing of Derek in February, 2015.

The third song, “Moonlit Sea”, is a composition by Derek J. Mason, with a little writing help from its vocalist, Anthea Mason. The song turned out to express a major story in Anthea’s life although the composition and draft production was done in 2004 in Derek’s 5th Avenue studio. This demo version was never previously intended for release. But we love it now, so here it is… very different from the two jazz covers above it on this playlist.

Notes: The song titles indicate composer copyrights. “Edith and The Kingpin” was composed by Joni Mitchell; this cover version excludes a verse. Melody Gardot wrote “Who Will Comfort Me”.

Lord of All – Contemplative...